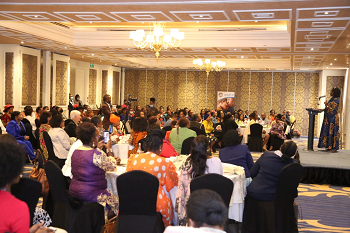 On 3rd June 2022, women professionals and women in business had an opportunity to engage on women’s leadership with Hon. Martha Karua, the nominee for deputy president of one of the two leading coalitions, in the run-up to the general elections to be held on 9th August 2022.

Through a breakfast forum hosted by KEPSA Foundation, a platform launched in 2015 to champion the socio-economic transformation of Kenya through a multi-stakeholder sustainable approach, the participants had an opportunity to express their gratitude to be recognized as valuable players in decision-making by having one of their own nominated to occupy the second highest table in the country.

In her welcoming remarks, Ms. Gloria Ndekei – Vice-Chair, KEPSA Foundation commented that the candidature of Hon. Martha Karua marked historic importance attracting not only local but also global interest. She took note of the maturity of the country in recognizing women in leadership positions not only on the political front but in both government and private sectors.

On her part, Ms. Flora Mutahi – Chairperson, KEPSA commended the government in its effort to encourage women’s participation in politics, business, and policy from grass root levels. In the boardroom, gender diversity stood at 36% in comparison to the global average of women holding board positions which was at 23.3% according to the Board Diversity and Inclusion report 2021 done by KEPSA together with the Kenya Institute of Management (KIM), Nairobi Securities (NSE) and New Faces New Voices (NFNV).

“The track record of your life is a clear demonstration and encouragement of all women that hard work pays and that there is a season for everything, and such a period as this, is time to bring back integrity, good governance, servant leadership, humility, and conviction,” said Carole Kariuki the CEO of KEPSA in her remarks.

Ms. Kariuki noted that the Foundation has always celebrated Kenyan women in leadership nominated or appointed in different positions in the country or outside the country for the recognition of their credentials, achievements, and what they stand for. “We are at a time in Kenya when we are witnessing great strides towards gender inclusivity both in the Private sector and Public sector even though we still have so much to do,” She said.

“Hon. Martha’s nomination is of historic importance, transcending ordinary nominations and attracting strong interests outside Kenya. We do recognize that Hon Charity Ngilu did run for the presidency in 1997 and Hon Martha in 2013 and various other women have come forward for various positions in the 2022 elections, but this nomination is qualitatively different as it was the first recognition by a major political coalition with a realistic chance of winning the presidency with a woman at the top ticket making it more possible than ever before. It is the bending of the arc of history to paraphrase President Obama in 2008.” Said Ms. Kariuki.

To address the challenges brought up by the participants, the KEPSA CEO reiterated the organization’s commitment to being at the forefront in the fight against corruption to ensure Kenya achieved its developmental priorities as set out in the Big 4 Agenda, Vision 2030, the AU Agenda 2063, and UN Sustainable Development Goals. To this end, the organization partnered with ‘The Blue Company Project’ to strengthen the fight against corruption through collective responsibility and self-governance amongst KEPSA members and the wider private sector in the long run. The umbrella body of the private sector also spearheaded the formation of the ‘Business Against Corruption Kenya’ (BACK), a platform that led to the drafting of the Bribery Bill enacted into law in 2016. The Act which came into force on 13 January 2017, places obligations on public and private entities to establish appropriate procedures based on their size, scale, and nature of operations, for the prevention of bribery and corruption.

Through the Covid-19 Recovery and Resilience Program in partnership with Mastercard Foundation, 106 (100 Micro and 6 SMEs) businesses have to date, benefited from the short-term loan financing without interest and no required collateral, amounting to about KES 42 million. Out of these, 78% of loan beneficiaries were female and 22% were male under the youth bracket, Ms. Kariuki noted.

In her remarks the nominee for Deputy President of the Azimio party, Hon. Martha Karua observed that continuous dialogue in politics was critical to ensure the right leaders are picked right from the national assembly, senate, and on to the top office of the President.

Ms. Karua noted that it was critical to do it right this time at all levels of governance to ensure we as a country finish the reform business to reap the benefits of the constitution of Kenya inaugurated in the year 2010. She reiterated that it was indeed the commitment of her party to uphold the rule of law, signified by her nomination to Deputy President and holder of the Justice and Constitutional office. The Deputy President nominee observed that good leadership was key to creating an enabling environment to operate businesses and lead healthy social lives and therefore urged Kenyans to avoid the narrative that fighting corruption was linked to witch-hunting. On the same note, she echoed that it was prudent for the responsible arms of law to apply alternative dispute resolutions to hasten the finalization of cases. This would also largely signify a zero-tolerance corrupt environment.

On her part, the Nairobi Governor Ms. Anne Kananu, recognized that sisterhood had gone global with the nomination of Hon. Martha Karua. She noted that leadership was not easy for women, but with the right support and focus, women are equally able to deliver on their mandate. She further emphasized that there was need to review the law through gender lines to provide equal opportunities.

Ms. Carol Karugu – the Deputy Governor for Nyeri County re-affirmed the nomination of Hon. Martha Karua as deputy president terming the move as a definitive one as finally the women of Kenya had been invited to the table. She remarked on the nominee’s resilience and graceful nature having conducted so far 78 rallies since her announcement as running mate was made. Her firmness will indeed clear the space for business and ensure government delivers to its citizens, the DG for Nyeri said.

Some of the issues addressed during the plenary session, which was led by Immediate-Past KEPSA Board Vice-Chair Ms. Rita Kavashe, revolved around creating consistent policies to support operations in the agriculture, mining, education, and tourism sectors, to enable the business community put structures that could support the growth of their entities globally.

The meeting was also attended by other seasoned political and businesswomen.