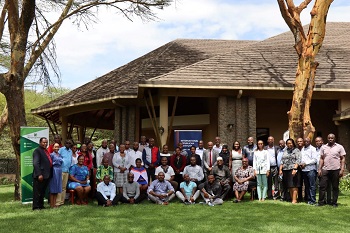 Last week, KEPSA took part in the Stakeholders’ Conference on Mitigating Violence around Kenya’s 2022 Elections that was held from 31st January to 1st February 2022 at the Enashipai Resort in Naivasha. The workshop, which was organized by the National Cohesion and Integration Commission (NCIC), Centre for Multiparty Democracy, (CMD-Kenya) and the International Republican Institute (IRI), brought together leaders from political parties, the civil society, women and youth groups, religious leaders and the private sector; to discuss ways in which Kenya can mitigate political violence before, during and after the General Elections.

Speaking during the conference, Mr. Maingi thanked CMD-Kenya and IRI for including the private sector in the dialogue, considering that the private sector plays a key role in Kenya’s economy. He highlighted the “Mkenya Daima” initiative whose primary purpose is to inspire Kenyans towards peaceful elections, and national prosperity after the elections. Mkenya Daima initiative is inspired by KEPSA but made up of representatives from civil society, religious leaders, youth, women, development partners, the academia, NCIC, Vision 2030, the media among others.

“The cost of violence is very high; lives are lost, livelihoods are wasted, businesses are lost, and it takes a lot more to rebuild the economy. As the private sector, we appeal to all political leaders to ensure that they continue to preach peace in their campaigns.” Noted Mr. Maingi.

NCIC vice-chairperson Wambui Nyutu said the commission, working partnership with EACC, is aimed at ensuring integrity issues are upheld to the letter by the politicians as stipulated by the Integrity Act.

Bishop John Warari from the Inter-religious Council of Kenya said the church will take the lead to preach peace and co-existence among Kenyans. We have over 72 per cent of our faithful who believe in religious leaders and we will engage them during and after elections.