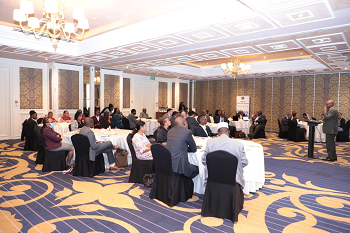 The Mkenya Daima initiative in conjunction with South Consulting hosted a meeting to discuss possible scenarios and implications of Kenya’s General Elections in August. The meeting was held at Villa Rosa Kempinski, Nairobi on 31st May 2022.

The meeting, which was led by Dr. Vimal Shah – Chair, Mkenya Daima Initiative and Prof. Karuti Kanyinga – Director of the Institute for Development Studies (IDS), University of Nairobi, saw a representation of all groups including religious leaders, civil society, youth and the business community.

While presenting an ooverview of the operating environment of the 2022 electoral politics, Prof. Kanyinga outlined the following:

Dr. Kanyinga recognized that the current operating environment led to new discoveries such as; for the first time the election was more focused on the economy as witnessed in both leading coalitions’ campaign messaging. He highlighted that the Judiciary was enjoying a significant public trust due to its latest rulings on constitutional matters.

However, looking on the not-so-positive side, the Professor noted that there was minimal attention to governance issues due to the absence of civic education and a less aggressive campaign to end institutional corruption as has been in the past.

In the key findings, the following was outlined:

In conclusion, Professor Karuti urged the private sector to keep having continuous dialogue and monitoring by identifying and engaging influential informal actors, media and religious leaders.

On his part, Dr. Vimal Shah reiterated the commitment of the private sector to adopt a more proactive approach to empowering more Kenyans for peace.

Ms. Flora Mutahi urged both the public and private sectors to keep mapping and understanding their operating environment to ensure business continuity during and after elections to reduce their exposure.