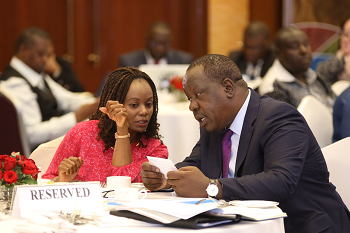 On 23rd May 2022, KEPSA made recommendations to the government on three cross-cutting thematic agendas to fast-track business and economic recovery by mitigating the effects of the Covid-19 Pandemic, rising food prices, and the ongoing drought.

According to KEPSA, sustained business incentives including tax and regulatory reforms for economic competitiveness, guaranteed security, and smooth transition of leadership after the elections, and curbing the high cost of food production should be of top priority in 2022.

Ms. Kariuki said, “We need to explore alternative markets for key products sourced from Ukraine and Russia such as edible oils, wheat, steel, and fertilizer. Kenya imports 60 percent of its wheat shortfall from Russia and the disruption of supplies has caused millers to resort to expensive imports from other source markets. Similarly, we must move away from relying on rain-fed agriculture and adopt measures to increase irrigation as part of the measures to address the impact of climate change and drought while mitigating post-harvest losses.”

Taking cognizance of the debilitating impacts of the Covid-19 pandemic on business and the economy, Ms. Kariuki said other priority intervention areas included implementing the additional 15 percent price reduction on electricity, finalization of the National Tax Policy, injecting capital into business by honouring pending bills and VAT refunds, and sustained digitization of government services for increased efficiency and transparency.

CS Dr. Matiang’i expressed his appreciation for the ongoing collaboration with the private sector adding that the executive arm of the government was committed to bringing everyone on board for enhanced collaboration. “The fast and solid response in addressing the Covid-19 pandemic in 2020/2021 was courtesy of the private sector’s mobilization efforts and collaboration with government and we will continue working together to explore our common aspirations”, said Matiang’i.

The roundtable attended by over one hundred private sector representatives was called to review the progress and implementation of cross-cutting issues and sectoral reform priorities as well as preparedness for peaceful elections.

To mitigate the food security effects of supply disruption caused by the ongoing Ukraine-Russia war, KEPSA has recommended the government lift the ban on wheat imports from India as millers explore alternate sources for wheat, maize, edible oil, and animal feed raw materials as well as temporary exemptions on import duty for maize and wheat.

“We are also asking the government to grant full exemption to bonafide food and feed millers on import duty charged on maize for six (6) months and twelve (12) months for wheat to cushion consumers and local farmers”, said Ms. Kariuki.

On election preparedness, the private sector called for peace and stability noting that these were key ingredients to a conducive business environment that businesses yearn for to thrive, grow jobs, and support economic growth.

“As Kenya looks forward to the 2022 General elections and the evolving governance space, there is a need to collectively look and envision a prosperous Kenya with good and accountable leadership, focus on and communicate positive gains and growth opportunities for the country, and change the political, economic and social-economic narrative to one that is positive and will build the country and its people towards the aspired Vision 2030”, said Dr. Vimal Shah, Chairman of the Mkenya Daima Initiative.

Dr. Shah urged the electorate to make informed and patriotic choices ahead of the elections noting that knowledge of their civic role and mandate in the transition of government was key in putting better leaders in office.

Speaking in response to matters raised, CS Matiang’i re-assured the private sector of the safety and security of the country saying, there was nothing to conclude that there would be disruption before, during, and after the elections in August. “I want to assure you that the country is safe and secure. The country is stable and the places that were hotspots in 2017 are no longer hotspots and I am certain we are going to have one of the most peaceful elections in the country this year”, he said.

According to the government, in addition to peace monitors, embedded with the Nyumba Kumi initiative to enhance neighbourhood security, the government had also procured 2,720 new vehicles to enhance mobility and rapid response by the Police and other administrative officers.

Similarly, 20,300 Police Officers have been recruited since 2017 with the training of security officers in public order management currently ongoing for officers who will be seconded to cover the election. A multi-agency team comprising the ODPP, DCI, NPS, CA, EACC and NCIC has also been set up to fast-track handling of hate speech cases with 145 hate speech cases already investigated and 65 files forwarded for prosecution.

Among the outcomes of the meeting, the government said it was keenly observing the macroeconomic stability by looking at unemployment, Balance of Payment (BOP), interest and exchange rates to ensure that the private sector continues to have a conducive operating environment including the implementation of the national tax policy to ensure there is certainty in tax and the medium-term revenue projections. The private sector was also challenged to task the next administration to digitize land transactions and carry land reforms forward.

Other assurances made at the event include a government committee that has been established to address the medium, long-term, and short-term effects of the Ukraine-Russia war and the recommendations of the committee will soon be shared with the private sector.

Saying that there were no fears of election rigging, CS Matiangi added that necessary laws governing the electoral process were in place in addition to the provision of enough funding for the IEBC to propel the transparency and credibility of the elections.